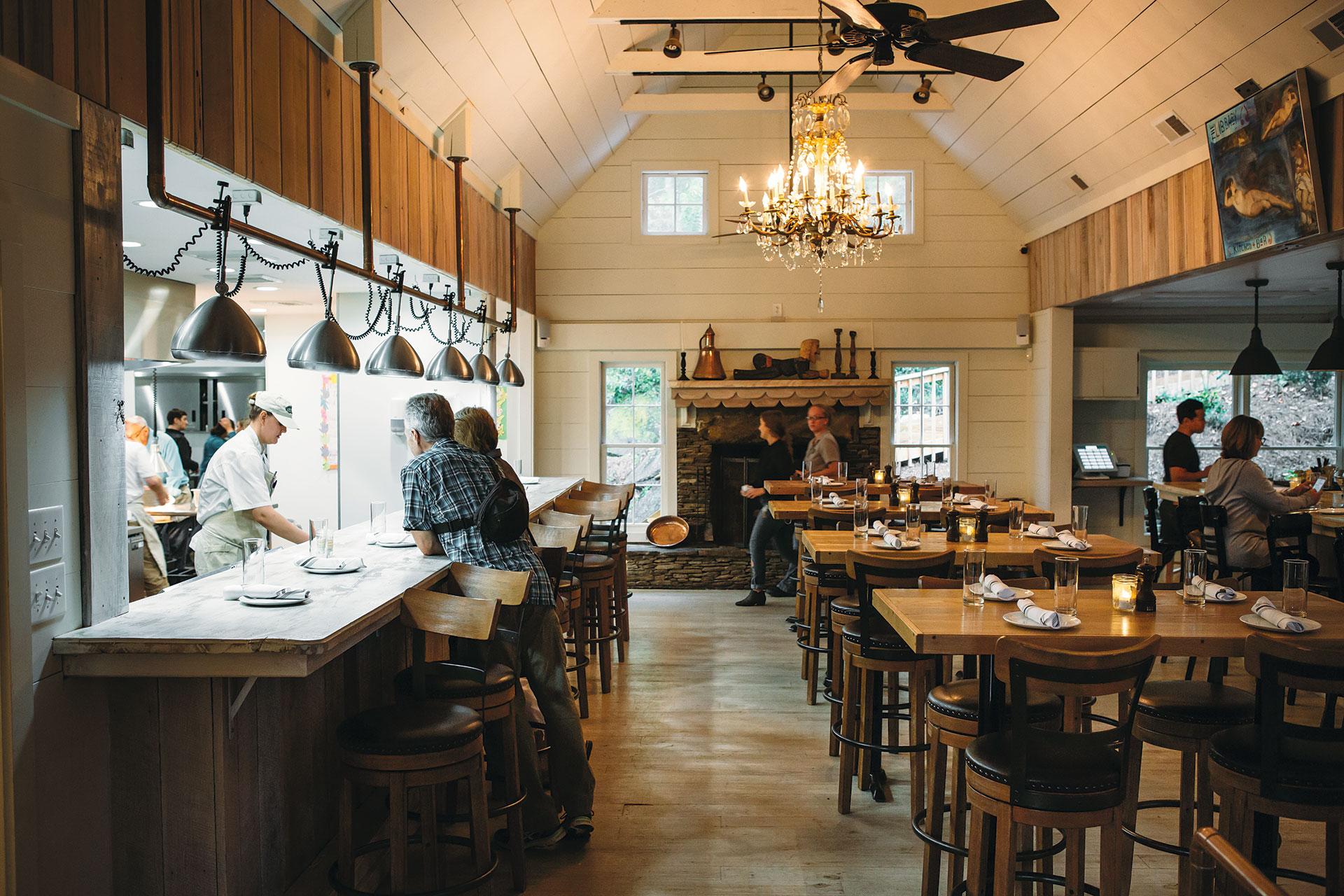 Unless you’ve vacationed in Sapphire Valley or are among the few who live there, you may have driven straight through this unincorporated community while traveling to Highlands or Brevard by way of US 64, in the waterfall-laden southwest corner of Transylvania County. There’s nary a stoplight and few reasons to pull over. So how an award-winning chef, who trained in Michelin-star restaurants and prestigious hotels in Europe and stateside, came to open a restaurant here with a clothing retail tycoon is as enticing a story as the menu itself. It certainly lured me.

Library Kitchen + Bar, which opened last New Year’s Eve and serves New American cuisine, is the brainchild of German-born Chef Johannes Klapdohr (previously executive chef at the renowned Old Edwards Inn in Highlands) and Marvin Gralnick, who, along with his wife, founded Chico women’s clothing company and owns a home in Sapphire. Now retired, Gralnick has launched a successful career as a painter, which is how the idea came to be—“two artists opening a restaurant together,” as Klapdohr explains. They’d met at a food show in 2015 and hatched the plan soon after.

For the location, the duo chose an 1864 farmhouse with a storied past. It was first a farm that supported nearby mining operations and much later housed an antiques store and finally a restaurant that operated from the 1990s until 2010. The name came from the long-gone Fairfield Inn’s library, which is rumored to have operated as a gentleman’s club where summer vacationers would gather for drinks before alcohol was legal in the valley. When the restaurant opened in the farmhouse in the ’90s, it was named The Library as a nod to the old watering hole. And since the sale of alcohol was still illegal until relatively recently, the former owner offered memberships and even lockers where guests would store their spirits.

“We have so many guests who recall coming to their lockers and even remember their membership number,” explains Klapdohr. Even as they were renovating the restaurant, locals would stop by and ask, “When will The Library be open?” So when it came time to settle on a name for the new restaurant, it was an easy decision.

The Library Kitchen + Bar is beautifully rustic. Original white clapboard siding keeps the farmhouse aesthetic. Inside, original and reclaimed wood has been whitewashed, offering a blank canvas on which to showcase the artistry: Gralnick’s colorful folk art-style paintings and Klapdohr’s expertly composed cuisine. The owners even found ways to incorporate elements from the area’s past: Mismatch chairs from the former restaurant add intrigue, and century-old books from the Fairfield Inn’s library are used as check presenters.

The menu, which changes seasonally and features quality ingredients that are sourced locally as much as possible, is upscale without being pretentious. Comprised of snacks, an array of small plates that pull from the mountains, fields, and oceans, a handful of main entrées, sides, and desserts, it is designed so that guests can choose their own dining adventure. “It doesn’t matter if you want to come for a special occasion and have four courses or are stopping in for a short visit with friends to have drinks and snacks at the bar,” says Klapdohr. “It was important to us for guests to decide how they want their evening to unfold.”

The night I visited with a friend, we opted to graze between the snacks, small plates, and sides—two dozen options in all. To start, lobster tail lollipops appeared as little fried balls of meat served on a skewer with a side of deliciously sweet whiskey-honey glaze for dipping. The Cape Cod mussels came bathed in a smoky puttanesca broth that we savored until the last drop. The hearty chicken and dumplings was, surprisingly, not the traditional comfort dish we expected. It was soupy and studded with vegetables, with gnudi standing in for the dumplings, and served in a small, piping hot cast-iron pot. At our server’s spot-on recommendation, we enjoyed it with a side of buttery, wild onion-sweet chili corn bread. The risotto with Maine lobster, shrimp, and Brie and the creamy black truffle and goat cheese macaroni may have put us over the edge. Both were very rich and in hindsight, one would have done the trick.

Despite our food choices, this is not to say that the menu is overly rich. It isn’t, as the lauded chef is adept at preparing complex dishes relatively unadulterated. Whether it’s Brussels sprouts or a velvety cauliflower velouté, roasted pumpkins and hazelnuts, a lamb cassoulet, or braised oxtail, the individual flavors shine through and mingle beautifully. Between the visual surroundings and appetizing plates of food before you, the aromas, and the tastes, the Library offers an artistic feast for the senses.

The Draw: Michelin star-worthy New American cuisine in an unpretentious, historic farmhouse
The Drawback: Some might find it a bit off the beaten path—but still worth the trip.
Don’t Miss: Beef tenderloin and braised oxtail on Kobe Yorkshire pudding or the lamb cassoulet