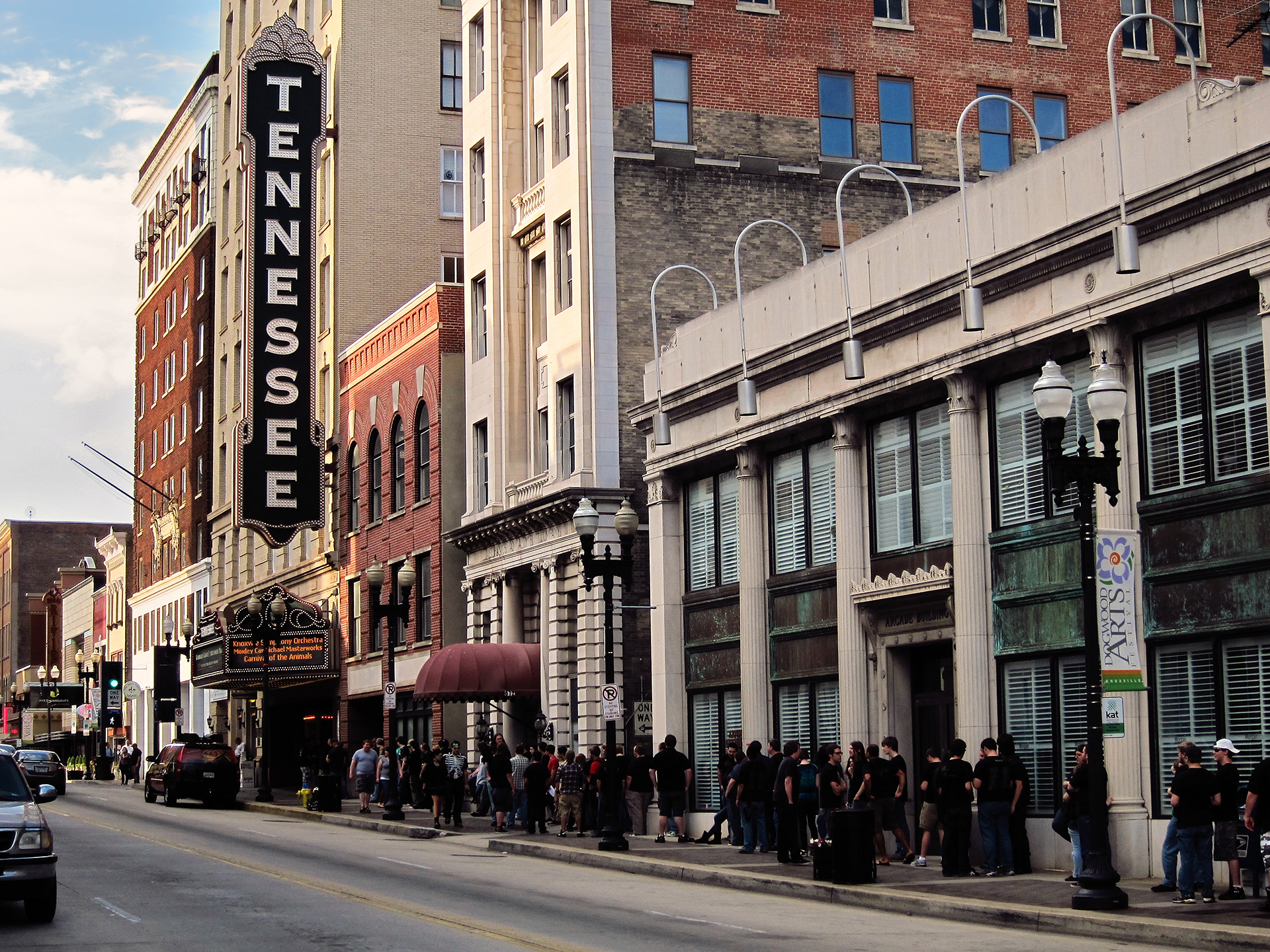 Towering above Gay Street, the glamorous Tennessee Theatre marquee of yesteryear hangs as a beacon of Knoxville’s past and present. Inside, every surface is gilded in shimmering gold, burgundy, and green patterns of Spanish-Moorish styling; sparkling chandeliers stretch the length of the grand entry hall; and, oh, the auditorium—words pale in describing the grandeur and detail of Tennessee’s official state theater.

The theater opened in 1928 as a movie palace, where ladies and gents paid 60 cents to watch the stars on the silver screen. But like most vestiges of earlier eras, the Tennessee eventually met its decline in the late ’70s and didn’t make a comeback until 2005, by which time urban sprawl had taken hold and downtown was left mostly deserted. An extensive $25 million overhaul restored the original lighting, furnishings, curtains, and carpeting, added state-of-the-art theatrical equipment, and enlarged the stage and behind-the-scenes areas, enabling the theater to host large-scale Broadway productions and major touring artists.

“When the Tennessee reopened in 2005, it was a catalyst for other things going on,” says theater Executive Director Becky Hancock. During this time, the arts district blossomed, the Sunsphere reopened after nearly two decades, and everywhere, new businesses began cropping up—the Mast General Store was one of the first retail spaces to open downtown in 2007.

Today, the city is thriving, and it’s a small wonder that its revitalization took less than a decade. As someone who has only begun to explore the city’s multitude of offerings, I have been pleased to discover a destination on the up and up that might be just under the radar of most.

Perched above the Tennessee River, Knoxville is a big, vibrant city with lots to see and do, and one that hasn’t lost its small-town feel and Southern mores. The downtown’s 10 or so blocks are walkable and full of trendy shops, bars, and sidewalk cafés. Beyond that, historic trolleys are free and travel to outlying points of interest—Volunteer Landing along the riverfront for dining and outdoor activities; north to the Old City for late night bar hopping; or west toward the iconic Sunsphere and park where the 1982 World’s Fair was held. And let’s not forget the University of Tennessee, where on game days, the emblematic color orange spills out across town. Between the arts and entertainment offerings, dining and shopping, and outdoor pursuits, one could easily spend a week or more. But let’s face it: Knoxville’s close proximity to Western North Carolina makes it more of a weekend jaunt for most. So, here’s a to-do list that keeps on giving, with each return visit.

With festival producer, promoter, and booking giant A.C. Entertainment based in Knoxville, the music scene is primo. Asheville sees many similar artists, though the venues here make it worth the trip. From a stunning Broadway production of Les Misérables to a raucous Primus concert (May 20), seeing anything in the 1,638-seat Tennessee Theatre is a treat. You can even enter for free at noon on the first Monday of the month for Mighty Musical Mondays, when Bill Snyder, the house organist since 1979, performs on the original Wurlitzer organ. The historic and more intimate Bijou Theatre down the street is an equally worthy space that’s showcased everyone from The Ramones to Herbie Hancock to Alison Krauss. According to General Manager Tom Bugg, “The beauty of this place is the acoustics. A lot of artists will unplug and come out from behind the mic.”

Given the big names that pass through Knoxville, it isn’t uncommon to catch the stars out and about. One place they’ve been known to make appearances is at WDVX’s Blue Plate Special, a live radio show that takes place at the Visitor Center, Mondays through Saturdays at noon. The free, hour-long concerts pull bluegrass and old-time acts, including the Carolina Chocolate Drops, to the stage. “You never know who’s going to show up,” says Visit Knoxville Communications Director Erin Donovan, citing Johnny Knoxville and Quentin Tarantino among the notables who’ve sat in the audience.

In the vein of visual arts, there are at least two must-see stops. The Emporium Center on the 100 block of Gay Street serves as a hub for the arts. It holds nine artist studios, offices for a handful of arts organizations, and gallery space. Across town, the Knoxville Museum of Art is free and houses six galleries, including the largest collection of works by East Tennessee artists, past and present. Running through July 27, a glass exhibit displays pieces by some of the biggest names in the medium and celebrates a new permanent installation by internationally renowned glass artist Richard Jolley, one of Knoxville’s own.

New bars and restaurants seem to crop up with each visit. And the farm-fresh, locally sourced mentality so prevalent in WNC extends here too, with area favorites Benton’s bacon and Cruze buttermilk gracing menus around town. For breakfast, one could stick closer to home by hitting up Tupelo Honey Café for some oh-so-Southern fare, or branch out and head to The Plaid Apron, located in the scenic Sequoia Hills neighborhood, a short drive from downtown. Inside, warm gray and deep teal walls are adorned with colorful artworks, and yummy baked goods beckon from a glass case at the counter. Morning options include house granola with Cruze Farm buttermilk, eggs Benedict served proper on an English muffin, and a savory bacon, kale, and garlic-cheddar omelet. Lunch and dinner are equally delicious and adhere to the fresh, local mantra.

Around lunchtime, make your way to Market Square, a lovely promenade lined with shops and eateries and host to free outdoor concerts during the summer months. Grab a sidewalk table at The Tomato Head and order the Kepner Melt, a heavenly combo of baked tofu, pineapple, roasted onion, walnuts, and pesto. There are lots of healthy options here, and the New York-style pizzas, which come with creative toppings like smoked salmon or lamb sausage, are on point.

For shopping in Market Square, ladies should make a beeline to Bliss for fashionable duds, accessories, and novelty gifts such as mustache ice trays. Bliss Home, across the square, holds equally clever accoutrements for your house. Also nearby in an upstairs space is Coldstream Market, which sells an eclectic array of reimagined vintage furnishings.

Come dinnertime, kick off the evening at Icon Ultra Lounge, where you can sip a favorite concoction while enjoying 360-degree sunset views over the city. The über chic bar and restaurant is on the fifth floor of the 266-foot Sunsphere. Be sure to stop on the fourth floor observation deck to learn about the tower and park’s construction for the 1982 World’s Fair, which drew 11 million visitors and unveiled the world’s largest Rubik’s Cube. You can still see it, across the street in the lobby of the Holiday Inn.

For dinner, Knox Mason’s Southern heritage cuisine is hard to beat. Deviled eggs and chow chow, pork rinds seasoned with bourbon barrel-smoked paprika, and Louisiana crayfish pie are among the refined offerings to be enjoyed in this stylishly modern restaurant. The gooey Tennessee Derby Pie might send you over the edge, but don’t miss a nightcap at the Peter Kern Library, an inconspicuous speakeasy located inside the posh Oliver Hotel. From the lobby, duck behind the unmarked sliding door and slip into one of the yellow leather sofas. Named for a 19th-century Knoxville businessman and decked as a handsome library, this swanky bar is all about the cocktails. Crack open a 1950s leather-bound encyclopedia to find a menu of original libations, all bearing character names from classic literature. The Holden Caulfield is a standout, made with Fireball cinnamon whiskey, Amaretto, house-made sour, and OJ. And if you follow my lead, and check into The Oliver Hotel, it’s a short elevator ride to your sleeping quarters. This sophisticated, 28-room boutique hotel commands a corner on Market Square, and is convenient to just about everything.

When it’s time to head outside, locals are fond of hitting the trails at the 1,000-acre Urban Wilderness or Ijams Nature Center, a 300-acre sanctuary along the Tennessee River. But visitors should start any excursion at the Outdoor Knoxville Adventure Center at Volunteer Landing, where you can pick up maps, rent bikes, kayaks and paddle boards, or sign up for a guided river paddle. Volunteer Landing is also a launch pad for river cruises. You can troll the waterway while learning about the area’s Civil War history with NavCal River Rides, enjoy dinner and a show on an old-timey paddle wheel, or take a sunset cruise aboard a luxury yacht.

If you’re traveling with youngsters, a visit to the Knoxville Zoo is a must. It’s a chance for up-close encounters with more than 800 creatures, including a family of adorable red pandas, curious meerkats, a Komodo dragon, and a collection of rare turtles. Many of the animals are part of a species survival program; the zoo works with organizations across the world in an effort to repopulate endangered and threatened species. New this spring, two educational play areas are being introduced, including a garden of carnivorous plants and an archaeological dig site.