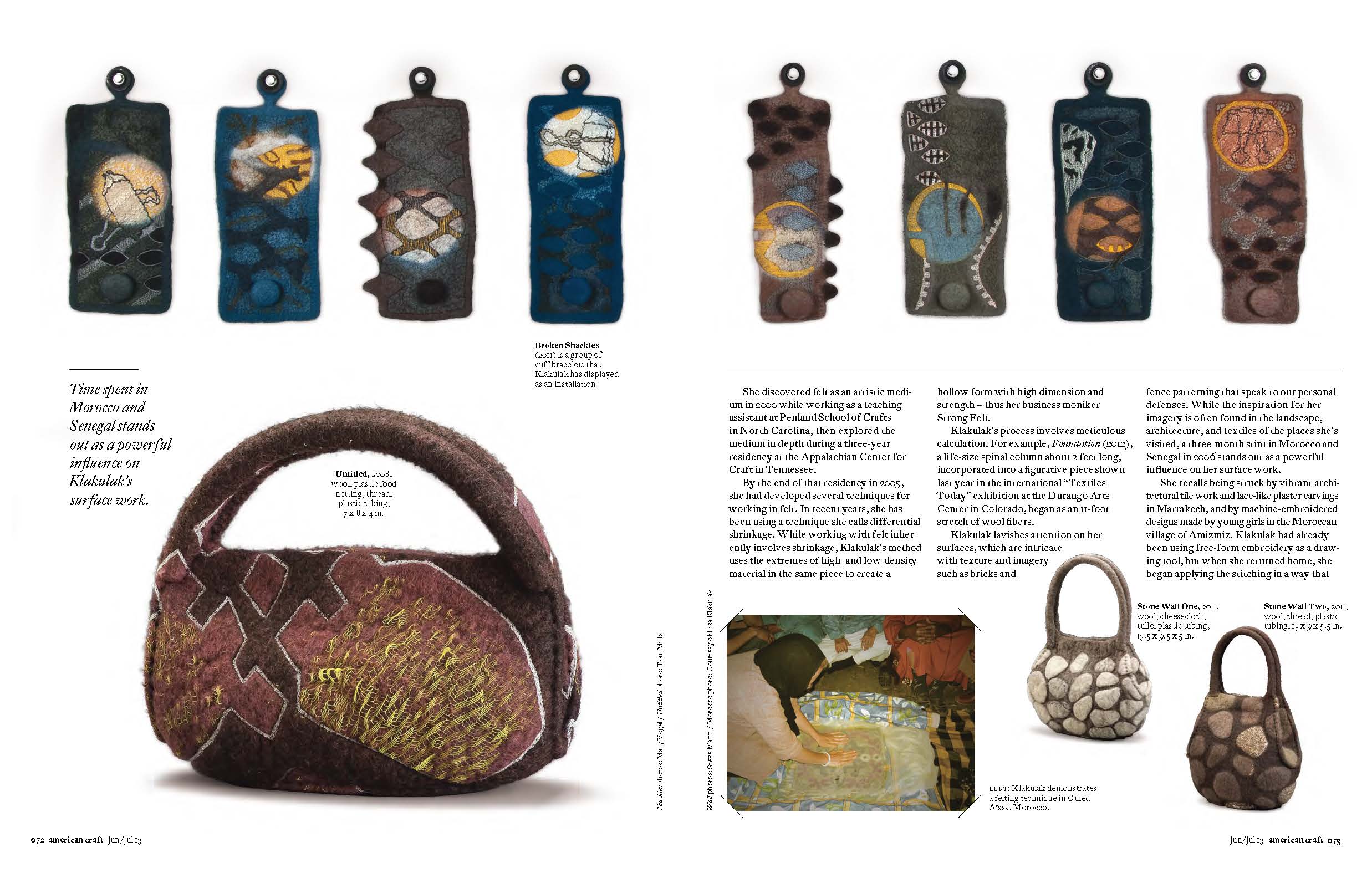 This is where Klakulak sculpts felt into textured body adornment and sculptural works. But it’s her time away from home, teaching and touring in far-flung locales around the globe, that’s given rise to her aesthetic.

“I’m an information sponge,” declares Klakulak, an inquisitive 37-year-old whose expertise in felt is in demand worldwide. She’s been invited to such places as Norway and Denmark, Australia and New Zealand to teach workshops, and she has traveled to rural villages in India, West Africa, and Spain to satisfy her own wanderlust. Wherever she roams, her experiences find their way into her work. One elaborate necklace, embellished with knobby and dangling protuberances, mimics the banksia seedpod she brought home from a recent trip to Australia, for example. A felted hand mirror crowned with an ornate flourish reflects the bulbous pinnacles she saw on churches in Russia and mosques in Mali. Even designs that might adorn a handbag or cuff borrow from walls, fences, and patterns she’s observed in her travels.

Travel is a crucial artistic resource for Klakulak. And yet art is not what compels her to leave home. “The places I’ve chosen to go are dramatically different from the world

I live in. Travel turns my world upside down and challenges me,” she says. “My artwork is how I process these visual and emotional experiences. I wouldn’t say that I travel to make art; I make art because I travel.”

Klakulak has been artistic since she was very young, growing up in the suburbs of Detroit. Her interest in culturally diverse travel emerged in her teens. On one trip to the Caribbean with her father, she recalls being more intrigued by the people working at the resort than by the other guests. Then there was the eye-opening class trip to Nicaragua during her college years at Colorado State University, where she earned a degree in fiber arts in 1997. But it was two years after graduation, on a six month spiritual and artistic quest with a boyfriend through India, Nepal, and Thailand, that she began to meld art and travel.

“It was the most monumental trip of my life,” she says. Forgoing the beaten path in favor of rural villages rife with textile traditions – once traveling a week by camel – she was taken by the “magnificence of work made with the simplest of materials. The poverty of materials and resources but the richness of the forms was totally inspiring,” she recalls.  She gravitated to the highly ornamented Rajasthani embroidery of northwestern India and natural dye processes, as well as patterns in the landscape, and returned to the United States eager to expand her knowledge of fiber arts.

She discovered felt as an artistic medium in 2000 while working as a teaching assistant at Penland School of Craft in North Carolina, then explored the medium in depth during a three-year residency at the Appalachian Center for Craft in Tennessee.

By the end of that residency in 2005, she had developed several techniques for working in felt. In recent years, she has been using a technique she calls differential shrinkage. While working with felt inherently involves shrinkage, Klakulak’s method uses the extremes of high- and low-density material in the same piece to create a hollow form with high dimension and strength – thus her business moniker StrongFelt.

Klakulak lavishes attention on her surfaces, which are intricate with texture and imagery such as bricks and fence patterning that speak to our personal defenses. While the inspiration for her imagery is often found in the landscape, architecture, and textiles of the places she’s visited, a three-month stint in Morocco and Senegal in 2006 stands out as a powerful influence on her surface work.

She recalls being struck by vibrant architectural tile work and lace-like plaster carvings in Marrakech, and by machine-embroidered designs made by young girls in the Moroccan village of Amizmiz. Klakulak had already been using free-form embroidery as a drawing tool, but when she returned home, she began applying the stitching in a way that produced an embossed effect, now a distinct feature in her designs.

“It’s so interesting to look back and see how these things come through in my work,” she says.

Another turning point for her came in 2009 when she was invited to teach freeform embroidery at the International Surface Design Association conference in Kansas City, Missouri. Though she’d already been leading workshops across the United States, the connections she made led to her first international teaching engagement in the Netherlands the following year.

That trip gave her the opportunity to visit the Hermitage Museum in St. Petersburg, Russia, which holds “the mother lode of felt,” she says. On view were some of the oldest felt artifacts in the world, first found frozen in the 1920s in a tomb in southern Siberia. An unusual cartoon-like depiction of a warrior on horseback dating to around the fifth century B.C. – an image that had stuck with her since she saw it on the cover of The Art of the Felt Maker nearly a decade earlier – spoke to the artistic intent applied to feltmaking for centuries

Pondering her own intentions for art and travel, Klakulak pauses. “For me, the medium is life,” she says. “That’s the art; it’s what you do with your life.”