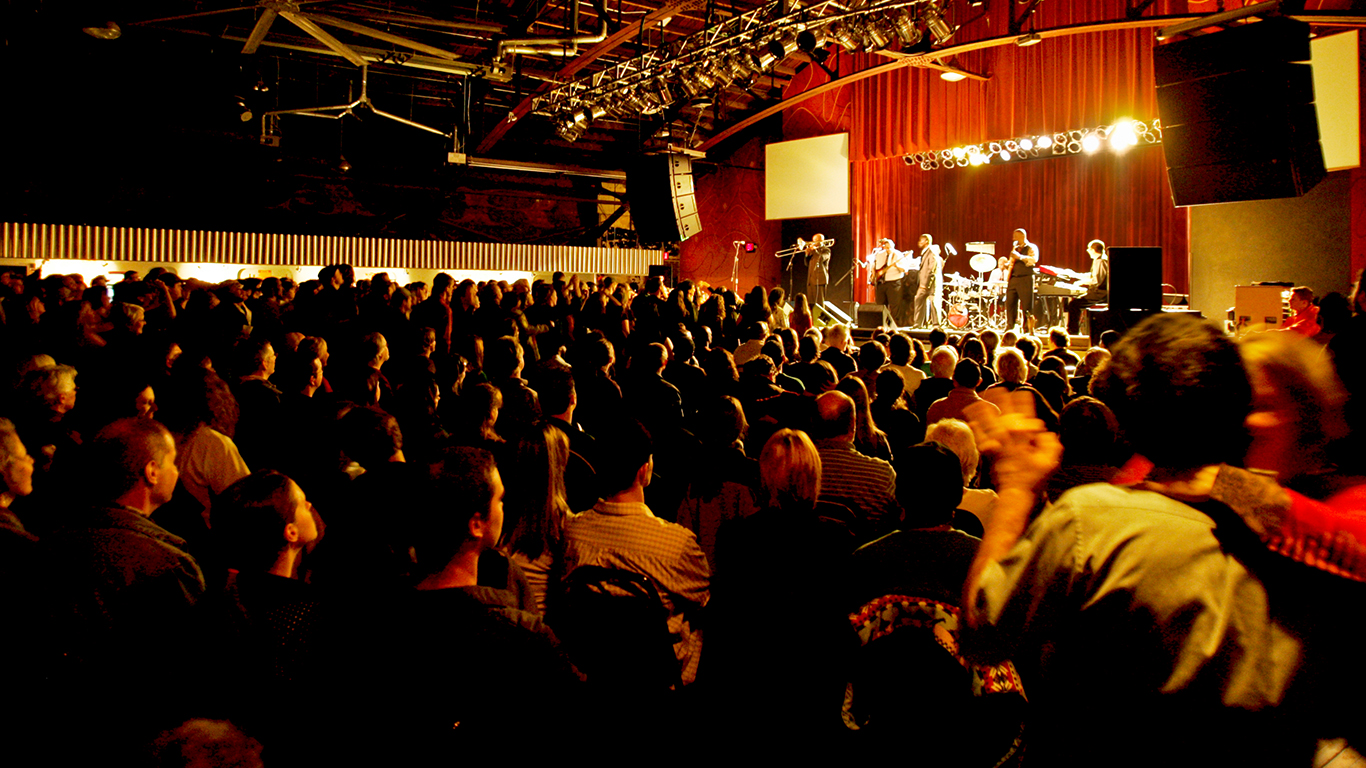 Asheville’s siren song lures locals and visitors alike into underground clubs and booming music halls, and the hills of downtown echo with street performers who create an urban sound track as unique as the city itself. A hub for eclectic and diverse music ranging from electronic to jazz, indie rock to soul, Asheville’s still home to traditional old-time and bluegrass music, of course, but it’s the city’s newer sounds that have attracted major attention this year.

The acclaimed NPR music program World Cafe, which airs on more than 200 radio stations across the country, featured Asheville in its “Sense of Place” series this spring. Host David Dye recorded performances and interviews with a dozen local performers and music pioneers, while a studio session featuring The Get Right Band showed off what Dye called the city’s “healthy funk presence.” Guitarist Tyler Ramsey (of Band Of Horses fame) acted as World Cafe’s guide to the city, and local innovators Echo Mountain Recording and Moog Music added their take on Asheville’s growing musical landscape.

Amidst all the hype, the Asheville Convention and Visitors Bureau recently launched a major music-promotion initiative highlighting local musicians, festivals, recording studios, and venues. Live-streaming concert footage and curated playlists are now featured on exploreasheville.com/music, and the campaign is bound to beckon even more music lovers to this city of sound. There’s never been a better time to experience Asheville’s music scene—here are 20 quintessential ways to take it all in.
–Jen Nathan Orris

The Millroom, a multi-use event space that hosts everything from receptions to comedy shows, is the place to go salsa dancing to live music. Once a month (summer dates TBD), local Latin outfit Juan Benavides Group kicks up heated rhythms while crowds take to the dance floor. (828) 225-2585; ashevillemillroom.com   —Melissa Reardon (update: this venue is now closed)

Get Close to the Music at 5 Walnut

If you’re anywhere near Walnut Street most any night of the week, you’re bound to be drawn to the eclectic sounds streaming out of the large open windows at 5 Walnut Wine Bar. Inside the handsome, 1,400-square-foot space, up to 80 people can be found mingling over wine, beer, and small bites (such as cheese and olives or smoked trout dip) while taking in some of the best free live music in town. Catch African folk music on Wednesdays or blues-rockers Pleasure Chest on Thursdays. Other nights showcase everything from swing jazz to gypsy blues to indie rock. (828) 253-2593; 5walnut.com

As Asheville’s reputation for culture and arts has grown, so too has the list of acclaimed musicians who roll through town, lending the added bonus of chance encounters with the likes of Billy Corgan of the Smashing Pumpkins or David Byrne of Talking Heads fame. Ten venues in Asheville and nearby Black Mountain host headlining acts. With a concert capacity of 7,200, the U.S. Cellular Center (now Harrah’s Cherokee Center) packs in the largest crowds, while the somewhat smaller Thomas Wolfe Auditorium, The Orange Peel, and Pisgah Brewing Company’s outdoor stage attract equally big names. Venues with capacities of 300 to 500, including The Grey Eagle, New Mountain (now closed), White Horse Black Mountain, and Asheville Music Hall, are where you can catch local and national bands on the rise and across multiple genres. Isis Restaurant & Music Hall, named Best Venue of 2015 by the International Bluegrass Music Association, is known for showcasing acclaimed bluegrass acts such as Sam Bush and David Grisman, as well as jazz, blues, and soul. And while Wortham Center for the Performing Arts presents all manner of plays and dance performances, it also features a variety of musical performers in a refined auditorium. –Melissa Reardon