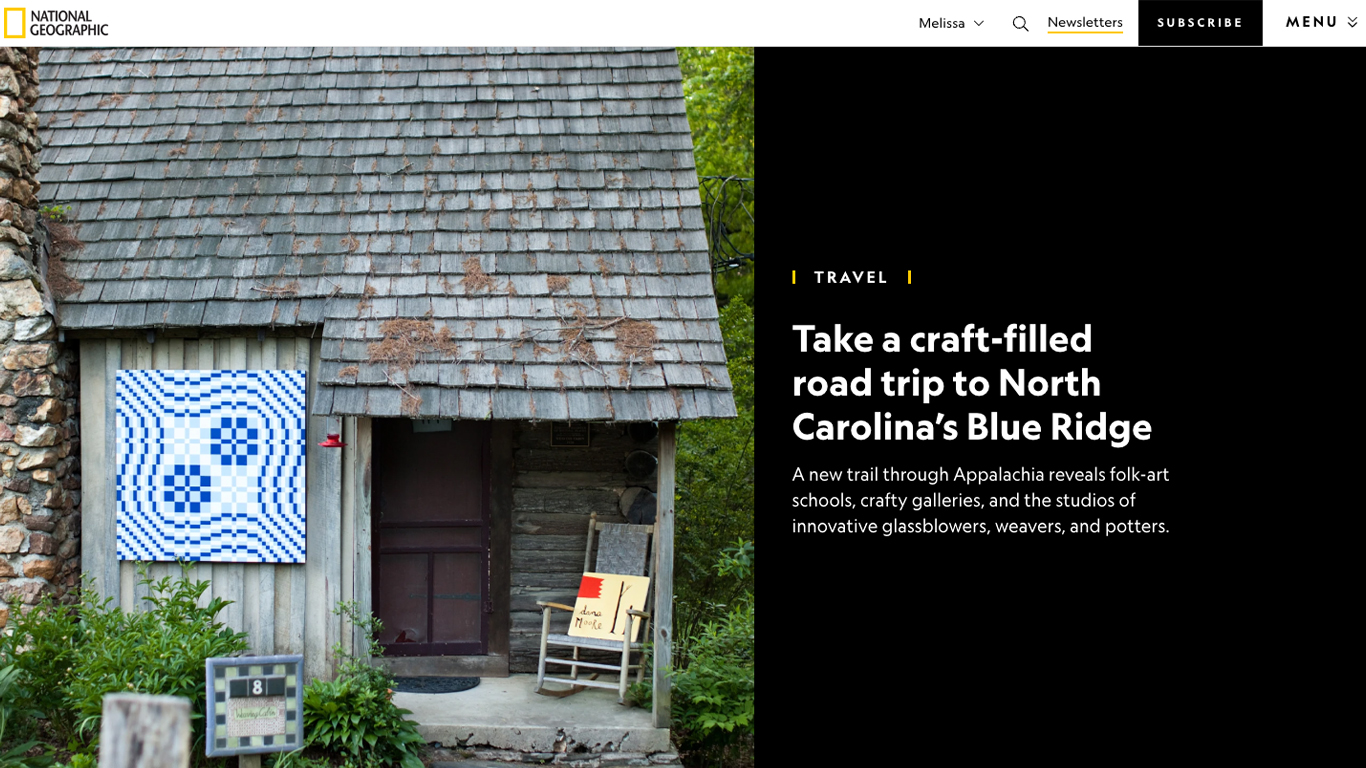 In her North Carolina studio, Mary Thompson—second-generation basket maker and member of the Eastern Band of Cherokee Indians—holds a stalk of river cane she harvested along the nearby Oconaluftee River. Working swiftly with a pocketknife, she splinters it into thin strips. She’ll then dye them with foraged butternut bark and bloodroot before weaving the cane into traditional Cherokee baskets, decorated with intricate zigzag or circle motifs. “It’s work,” assures Thompson, revealing marred hands.

Spot one of Thompson’s $1,000 baskets at Qualla Arts and Crafts gallery (in the town of Cherokee), and it’s difficult to grasp how much time, effort, and cultural heritage coalesced to create it. But visiting an artisan at work in their studio makes things clearer, and can also help preserve traditional skills and foster economic sustainability.

That’s the point of the new Blue Ridge Craft Trails, an online guide to more than 300 artist studios (Thompson’s included), schools, and galleries across western North Carolina. Developed by the nonprofit Blue Ridge National Heritage Area, the trails stretch from the state’s rural westernmost corner around Brasstown, east to the Foothills, and north around quaint Mt. Airy (aka Andy Griffith’s Mayberry). At the center of this creative mecca is Asheville, where dozens of galleries and the River Arts District connect visitors hundreds of working artists.

The Craft Trails were formed to promote cultural tourism and inspire road trips. For travelers, they’re an invitation to see glassblowers, potters, weavers, and wood carvers at work. Here’s how to start exploring.

To understand why this pocket of the planet is worth exploring for its crafts (typically defined as art that is materials based), it’s helpful to understand why such a strong creative culture exists along the Blue Ridge.

Craft may have been born out of necessity, during times when people had either to make or barter fabrics, furnishings, cookware, and such. But after industrialization in the United States, these cottage industries began to die out, except in rugged, isolated places like Southern Appalachia, where many residents didn’t have the means or access to purchase goods.

At the turn of the 20th century, Asheville, the region’s largest city, was drawing national attention and distinguished, wealthy visitors. Among them were a handful of well-educated women who wanted to bring prosperity to homemakers living in what was then a very rural, economically depressed area.

The intricate weavings, quilts, baskets, and other home goods being created in the region were of exquisite quality and had the potential to fetch high prices among buyers in East Coast cities. By creating educational opportunities that paid skilled artisans to teach others and helping them sell their wares, these female philanthropists established a robust crafts industry that still thrives today.

Among the pioneers was Frances L. Goodrich, who created the Allanstand Craft Shop in 1895 and later launched the revered Southern Highland Craft Guild, which now has more than 900 members across nine states. The guild operates a Folk Art Center on the Blue Ridge Parkway, where Goodrich’s shop still sells hand-carved wooden bowls, blown-glass cups, and statement necklaces in intricately worked silver.

Located in a pastoral valley in Brasstown since 1925, the John C. Campbell Folk School offers hundreds of weekend and weeklong classes. Students can stay on campus, bunking in restored 1930s bungalows or modern dorms and enjoying communal meals and frequent concerts.

About an hour northeast of Asheville near Burnsville, Penland School of Craft has been hosting classes in clay, textiles, glass, and other mediums since 1923. Amid the woodlands and mountain foothills, the school operates in modern and early 20th-century buildings, including a stone-walled cottage with a crafts supply shop. A gallery sells artists’ wares, too.

“This craft movement that happened between the 1890s until about 1945 has shaped Western North Carolina historically,” says Fariello. “It’s certainly one key reason why we have so much activity today.”

This all attracts an audience of residents and visitors who appreciate the handmade. And having an economy around art attracts more artists. Asheville, which sees over 11 million annual visitors, offers a glimpse of the impact across the 25 counties represented on the Crafts Trails. According to a 2019 study, revenues in the creative sector topped $1.6 billion in Asheville’s Buncombe County alone.

Creators of the Crafts Trails hope they lead crafts enthusiasts beyond Asheville and stimulate small-town economies. Thompson says that, when visitors come to her studio, “it gives me an opportunity to educate people about our culture, history, identity, and [show] that we’ve changed and evolved, that we’re still here.”

“We’re preserving a skillset,” Fariello says of the Crafts Trails. “We’re allowing craftspeople to push their boundaries and to continue making, because we’re hopefully providing them with an enhanced market.”

Along the Crafts Trails an hour north of Asheville, in the sleepy town of Spruce Pine, Treats Studios was formed by several young artists who met nearby at Penland School of Craft. Last year, the group purchased a redbrick 1930s printing building which they are turning into a shared creative space for emerging artists, with studios, equipment, and gallery space.

“This region has a big diversity of craft,” says Shae Bishop, one of the cofounders of Treats. “The energy of seeing people working in different materials, and them giving me advice or lending me tools outside of my own craft are so helpful.” Such exchange and experimentation is pushing members of the studio to use traditional craft methods in new, sometimes wildly innovative ways.

No longer confined to making for mere function, North Carolina creatives like them are blurring the lines between art, craft, and design. Their work is held in museums, galleries, and private collections around the country.

Unlike creators in expensive major cities like New York, the weavers, potters, and other crafters choosing this rural, blue-rimmed corner of the U.S. are here for the thriving art community and the desirable quality of life.

“So much about what humans do has changed with industrial and digital revolution,” says Bishop, “but we have this impulse to use our hands to explore things. I see myself as part of that history that’s helping preserve craft.”

(Mountain Made, Amble along the Blue Ridge Craft Trails. Charleston magazine, May 2022.)